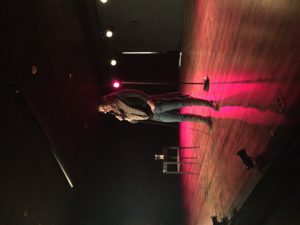 Nerdle Pop celebrates the art of humor. The funny and the fantastic. Nerdle Pop really loves comedy — in all its forms. We focus on the performing arts, including stand-up, improv, sketch, and stage productions. Nerdle features performers, writers, humorists and artists with range as assorted as a 64-count box of Crayola crayons.

At Nerdle Life, we have an appreciation for comedy on the web and tv, and in film and music. Nerdle celebrates comic strips and books, videos, cartoons, and the visual arts including graphic and fashion design and conceptual art, too. We like the art that inspires ideas and induces happiness.

In short, Nerdle finds the funny in art. Then geeks out about it.

Begging the question, why Nerdle? What does it all mean?

Nerdle is the name of a cat founder April E. Allford had growing up in the ’80s. He was orange and white. He was cute and funny. He once stole a Whopper cheeseburger off my dad’s plate when he wasn’t looking. He tried to scarf it down, unsuccessfully. Nerdle Pop isn’t about cats. Although cats may make a random appearance. If they’re funny.